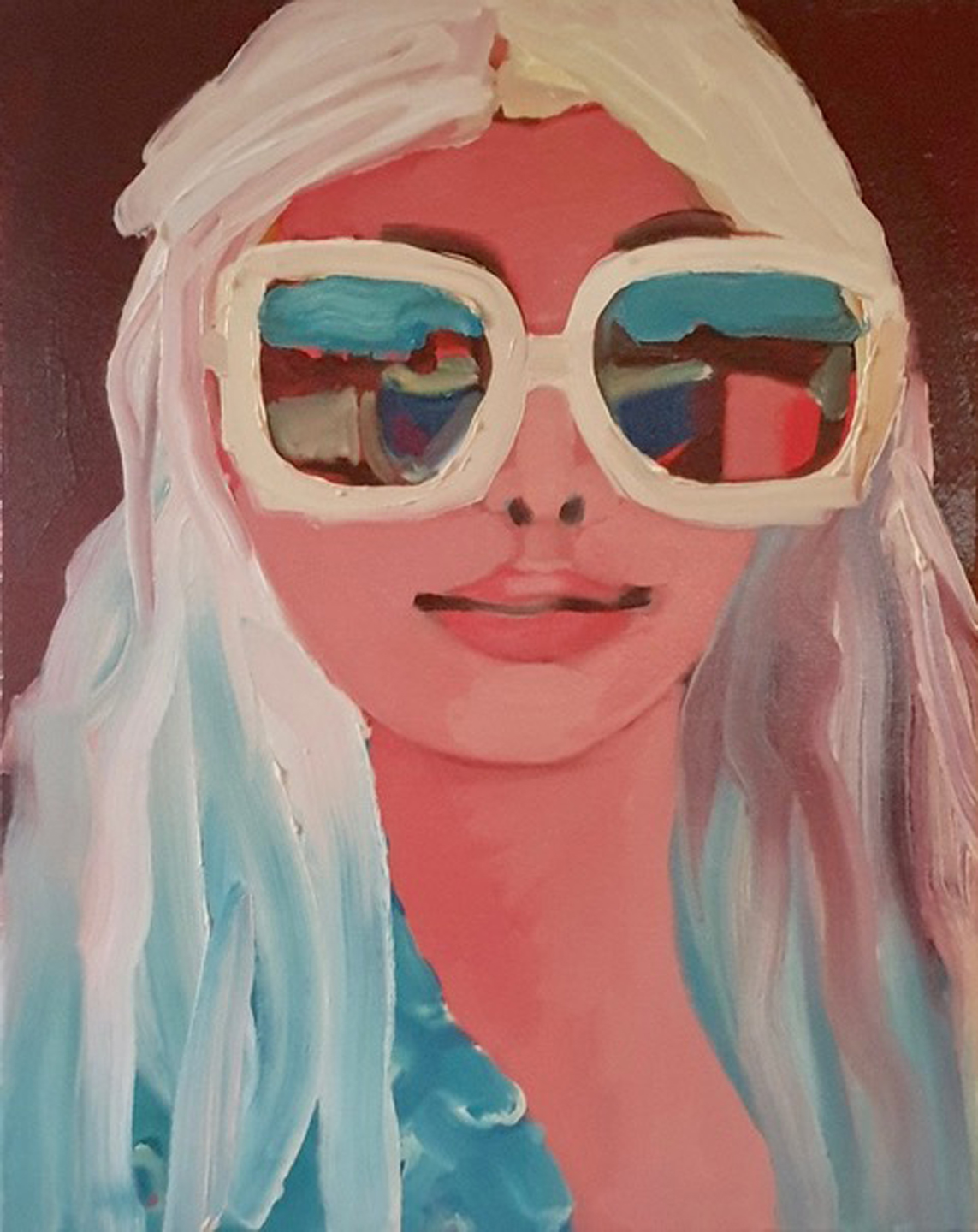 ‘Here’s Looking at You Kid’
(Paris Hilton and her Sunglasses)

My paintings are depictions of women in their ‘finery’, from Tudor Portraits, Bunny Girls and Circus Girls to Paris Hilton.  I am fascinated by the theatre and presentation of women, of the other,  and by the signs and symbols that are used to signify them.  Holbein was commissioned by wealthy patrons to paint their portraits.  Royal Portraits were carried out to flatter and deceive.  Henry VIII was first introduced to his prospective wives via depictions that bore no resemblance to the flattering portraits that arrived from abroad.  They were the equivalent of today’s advertisements, women’s magazines, of social media’s fakery, designed to coax him into marriage.  Painting was political.

My paintings are a commentary on the art of Portraiture.  My paintings are looking at the idea of selling a dream, of flattery, deception and attraction.  I want to attract the viewer, to seduce them with the art of painting and the jewels, silks, and lace.  I want to pull them in, to make them look, admire and love what they see.  Like a theatre or a circus act I want to entertain and suspend belief, to take you way from the everydayness of ordinary life.  I want the viewer to fall in love like Henry VIII did.  I do not seek out to present a specific person or even a ‘real’ person behind the mask.  I am looking at the mask itself.  They are also about the depiction of women and my way to explore this is through the difficult and forever complicated process of painting.  I endeavour to paint a convincing painting by the examined act of painting, and where the act of painting is examined and presented even to itself.

I have chosen to paint Paris Hilton because, to me, she represents the complete ‘mask’.  She is all pretend.  Fake hair, eyelashes, nails, body, everything.  Her ‘lifestyle’ is all for the show.  She longs to be looked at and admired and loved.  I think she is ridiculous and actually very funny because she appears to be sending up the idea of what it means to be a woman, or at least what some people think women are.

My Paris Hilton portraits are an ironic look at her own self portrayal.  Paris lives and breathes fakery but she is very serious about it and as such she becomes strangely compelling to watch.   I am confused.  How, after Feminism, can a woman present herself in such a way?  Is Paris knowingly being ironic?  Does she know what she is doing?  To a certain extent she absolutely does.  She is a living, breathing Barbie Doll, with a pink house and chihuahuas and a pink car.  She eats what every child would love to eat: ice cream, jello, cheerios and ‘sprinkles’.

Paris is not unlike Marie Antoinette in her intentions to portray her beauty, wealth and privilege and with Social Media as her tool, she sets out to provoke envy and adoration.

Sunglasses have become a trademark look of celebrity, saying ‘Look at Me, Don’t look at me’ and apart from Alex Katz’s paintings,  are rarely depicted in ‘serious’ portraiture.  We are blocked, to use the language of social media, from seeing too deeply into the soul that may or may not have been sold to the devil.

I am interested in how women have been depicted in the history and tradition of Portraiture.  Women were painted as extravagant objects of desire by male artists primarily for the male gaze.  Their presentations and representations were merely decorative enticements to lust, marriage and status.

Contemporary women artists such as Cindy Sherman, Paula Rego and Alice Neel turned these ideas on their heads and with these acts of defiance, shone a light onto the ironies and misfitting perceptions of past ideas of what it is to be men and women, male and female.

Social Media has replaced the hand held, pocket miniature that used to be secreted away for private viewing, and now as women we find ourselves at both ends of the telescope, viewing and being viewed.